Surprise on the Tyrrhenian Sea 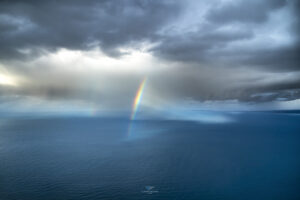 TINDARI – On October 18, 2021, USRA chose a shot by filmmaker Alessia Scarso as the Earth Picture of the Day. Earth Picture of the Day (EPOD) is a science outreach service curated by NASA’s Earth Science Division and the EOS Project Science Office at Goddard Space Flight Center, in collaboration with the Universities Space Research Association (USRA) consortium, and publishes an evocative annotated Earth science image each day.

“For the past week I have been traveling around Sicily studying some locations. From Nebrodi to Madonie, from Peloritani to Etna, I had had no respite from the rain. Suddenly, on the courtyard of the Sanctuary of Tindari, overlooking the Tyrrhenian Sea, I found this show. I think it is not possible to find words to explain that moment. The photo is enough for itself”.

Alessia Scarso is a director and astrophotographer, member of the well-known group of photographers Pictores Caeli, that Nasa often attends through publications of spectacular scientific shots.