A SET OF WISDOM, TRADITION AND ... A HINT OF SUPERSTITION. THE STORY 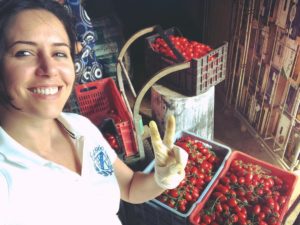 MODICA – It’s on a day in early June that someone takes the conversation, “When are we going to make tomato preserves this year?” They plan ahead, the day to “make the bottles”. It’s a combination of wisdom, tradition and superstition. The moon must be in its crescent phase, because the tomatoes are more full of pulp. One chooses the recipe of the year, because one does not make sauce with only one type of tomatoes. You call the farmer and book the kilos you will need. The sauce is made in the family and for the family, and by family we mean not less than a few dozen people who will eat it during the coming year. Women and men are indiscriminately involved in the ritual, each with a precise role, which does not change over the years. Who loads, who washes, who “spiricudda”, who cooks, who passes, who bottles, who “leva cosi ro mienzu”. And women in a state of indisposition, sorry, but they can not participate. Nor touch. Or even watch. Otherwise the bottles “burst”.

A whole day is dedicated to this rite, from morning until afternoon. From cooking to bottling. On that hot day the common lunch is the most fragrant of the year, with pasta with fresh tomatoes, and fried eggplant on spaghetti, topped with a leaf of freshly picked basil and a sprinkling of caciocavallo cheese. Wisdom that manifests itself every year and that is kept among the most beautiful memories of those who live this moment. It is preserved, in fact, fatally, by providence: food is preserved and tradition is preserved.

An apple of love for the French, because of its presumed aphrodisiac properties, an apple of gold according to the first treaties that mention it, because the first imported variety was yellow, it is a wonderful example of a good that becomes wealth and tradition starting from a process of global integration. It was imported in 1500 from West Indies, cultivated in European courts as an ornament and only afterwards it became a food, and only later it was able to be easily kept very hot just cooked in glass bottles. The seeds are studied and marketed by Israel, the sprouts are grown in Scandinavian peat, the fruit ripened and harvested under the Mediterranean sun. The tomato is fruit. Fruit not only of the earth, but also of the civilization of the world, and of the man who seeks, discovers, and shares. A wealth contained in a fist that, although not everyone is aware of its history, brings families together around rituals and people around laid tables.