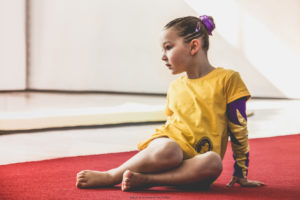 Olivia stands still, tiny and petite, on the platform in front of the judges.
She is afraid, as only a little girl can be in a national competition.
It is the mind, which must guide the body, in this moment.
Not only in movement, but above all in motivation.
Olga Korbut, a seventeen-year-old gymnast who enchanted the public, gave a disastrous performance in the apparatus where she excelled at the 1972 Olympics. She cried.
Olivia, paralyzed, raises her arms for the ritual salute.
This is the start of her moment. It seems endless. And she cries.
“There’s still something I can do,” Olga told herself, in 1972.
And it’s there, on the first steps of Olivia’s run, after three feet on the ground, that she erupts.
That’s where the fire ignites, the radiance flares up, the light comes on, the bright, dazzling, dazzling light that separates fear from dreams.
It is there that we rise above it all.
The chase becomes a race, the gaze narrows forward, passion takes her with it and she jumps into the void.
Olivia continues the rest of the race.
So did Olga, who felt like she was seven years old while dancing on a lawn in the open air.
Olivia, seven years old in two days, showed me the spark that ignites when you strip away fear.
I saw courage converse with fear and realized it’s just a moment.
It’s not thought. It’s instinct.
Olga won the gold medal.
Olivia became the Italian champion.
It’s at seven years old that you can teach your heart to smile.