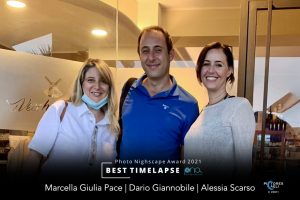 PARIGI – Three timings, three shooting points and three Sicilian photographers for the timelapse that won the PNA, the “Photo Nightscape Awards”, the prestigious international competition dedicated to photos and videos with astronomical landscapes organized by “Chasseurs de Nuits”, a French group based in Montreuil.

The winners of the Photo Night Awards were revealed on July 15 in Paris, and the timelapse category sees on the podium an all-Italian collective work: Etna photographed by Dario Giannobile, Marcella Giulia Pace and the director Alessia Scarso.

It is a film made on Etna with images in sequence whose technique is defined “timelapse” and that shows the moon and the stars alternating between puffs and paroxysms of the volcano. The three sicilian astrophotographers, all members of the well-known group of astrophotographers Pictores Caeli, have built a short story in their homeland on the highest and most active volcano in Europe, a UNESCO site, in a period in which Etna has been particularly lively, and that has convinced the French jury to award them the prize for best timelapse in the 2021 edition of the PNA.

The narrative approach to the volcano begins through the beautiful images that Dario Giannobile has taken from Lake Gurrida (Randazzo) and Lake Biviere (Cesarò), seasoned with the elaborations of startrail that recall a party as if they were fireworks. The ash emissions prepare the meeting of the full moon with the top of the southeast crater, and for Marcella Giulia Pace and Alessia Scarso it was an opportunity to photograph from Fornazzo (Milo) for the first time an Omega Mirage of the moon on the side of the volcano. As predicted by the emissions here is that the lava makes its way, overflows from the crater and Dario Giannobile, from the top of Mount Zoccolaro, collects in images the power of the spectacle of Nature.

Dario, Marcella and Alessia together with Giorgia Hofer and Stefano De Rosa are members of Pictores Caeli, a group of astrophotographers born to share and develop ideas on astrophotography, combining mutual technical and artistic skills to develop high quality visions, certified by a shared brand. Their works are appreciated in international competitions of astrophotography and often guests of the popular communication of USRA (Univiersities Space Research Association) and NASA (National Aeronautics and Space Administration).

The winning video will be projected in high definition during the exhibition “Ad Sidera. C’era una Volta Celeste” this summer in Modica (RG) at the former Convento del Carmine, on the occasion of the first photographic monograph by director Alessia Scarso, where Pictores Caeli will be special guest. It is also possible to visit, for the whole month of July, the photographic exhibition of Marcella Giulia Pace in San Vito di Cadore (BL) and for the month of August in Ficarra (ME), where the shots of the unreleased Miraggio Omega will be present.

The “Photo Nightscape Awards” ceremony will be held in Paris on September 21, 2021.