AND THE LIGHT AND THE SOUND. Kromatografica calendar 2022

The wonder of the Universe through light and sound 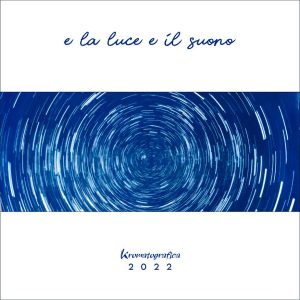 ISPICA – The Greeks since the antiquity conceived the Cosmos like a seven strings lyre played by Apollo, god of the Cosmic Harmony, even if the notation of secret music of the spheres will be proper of the pythagorean school. In the Middle Ages the consideration of the universe ordered as a musical system, will be a fundamental prerequisite for a large number of theorists attributable to the so-called Platonic-Stoic-Aristotelian koiné, which will exert great influence on Dante, thanks to the mediation of the teaching of Boethius, St. Augustine and St. Bonaventure.
From the cyanotypes of Alessia Scarso, director and astrophotographer, who fix some images stolen from the sky, and from the literary, poetic and philosophical research of Evelina Barone, a narration is born that takes the form of a calendar, to show that the Universe is capable of arousing wonder in humans through sight, yes, but also through a barely perceptible sound that comes to us as music from the cosmos.

“Stories change the form in which they are presented. Sometimes it’s a book, sometimes it’s a song, sometimes it’s a dance step, sometimes it’s a movie, and sometimes it’s a photo. Something makes its way in. However.
I listened to the night and the stars, chasing a synthesis between real image and imagined reality. I immersed myself in the harmony between the astronomical elements and the earthly scenery, in a nostalgic search for a starry sky that is now less and less visible.
Experimenting with an ancient manual printing technique, the cyanotype, I brought the digital into analogue, shaping with my own hands unrepeatable prints, synthesis of the alchemy of Sun, Salts and Water.
In the contemplative journey through time, night and beyond the visible, Beauty and Science converse in concert, and I had the privilege of encountering that frequency capable of comforting and alleviating human nature.
I have played with the invisible and the imperceptible in a historical moment that sees Man and Nature contending for supremacy on Earth, choosing to sing the return to contemplation as a wish for Peace.
Therefore, I always ask Heaven, seat of the great questions of Man, for the comfort of accessing the state of enchantment and wonder.
There is a movement in this search towards the High that inevitably leads to mirroring, so the movement goes back down into the sternum. When this reflection is accomplished, the grace of consonance with the Other is manifested.
Here, between these pages, this third movement has manifested itself.“.

Here the playlist with the accompanying songs subjected to the “test of the sky”.

For a copy of the calendar write to info@kromatoedizioni.it

The calendar, published by Kromato Edizioni, is linked to a collection of free offers in support of La casa di Toti Onlus