AD SIDERA. Once upon a time the Sky

The exhibition-event of the director and astrophotographer Alessia Scarso 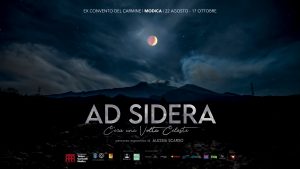 MODICA – From August 22 to October 17 the former convent of Carmine in Modica (Piazza Matteotti) hosts AD SIDERA. Once upon a time the Sky, an exhibition of the director and astrophotographer Alessia Scarso. An exhibition-event sponsored by the Fondazione Teatro Garibaldi, which between photos, videos, multimedia and multi-sensory installations, will make us discover the world above us and that, also because of man-made pollution, we observe less and less.

With a cinematographic gaze accustomed to reading a palm above reality and one below the imagination, the director Alessia Scarso monologues with the night and the stars, in an exhibition where time stops in photos of landscapes with a pictorial flavor and the flow of events is reshaped in timelapse.

AD SIDERA. Once upon a time the Sky, set to music by composer Marco Cascone, invites us to immerse ourselves in the harmony between the astronomical elements and the earthly scenery, singing nostalgically to a starry sky that is becoming less and less visible due to human intervention. Photographs, video projections and multi-sensory rooms give life to a contemplative journey through time, into the night and beyond the visible placed in a sort of Wonderland where beauty and scientific data dialogue in concert.

Guests of the exhibition the painter Ilde Barone and the award-winning astrophotographers Pictores Caeli, of which the director is a member. In a historical moment in which Man and Nature contend for supremacy on Earth, Alessia Scarso sings of a return to contemplation as a wish for peace, asking Heaven, the seat of Man’s great questions, for the comfort of accessing the state of enchantment and wonder.

“It matters little if the stories change the form in which they are presented. Sometimes it’s a book, sometimes it’s a song, sometimes it’s a dance step, sometimes it’s a movie, and sometimes it’s a photo. Something makes its way in. However. – emphasizes the author – It all started with the discomfort of looking at the height of the man. What I perceived did not nourish me, and I felt the need to look up in search of something cleaner. I could end it here, because a visitor wouldn’t need anything else: the relationship between spectator and work is an intimate moment. Looking upwards is not something new for me. I experienced it as a curious teenager during the vigils at the stars and the campfires, and during the nights of fishing on the beach I was in their constant company. Hours and hours in the dark, with plenty of time for the eye to get used to the darkness. It wasn’t long before there was a camera next to the fishing pole to help me explore beyond what the human eye is capable of perceiving.

My eyes on the sky joined to my feet on the ground did not push me farther and farther away, but on the contrary, closer and closer, and I discovered the pleasure of contemplation: a kind of ecstasy linked to the joy that some things existed, just because they actually existed and I could observe them. In the landscapes I sought out, observed, explored and contemplated, I felt the tension of connection with the Universe, but with my feet on the ground.

The difficulty of finding suitable dark places gave me the opportunity to understand to what extent Man has imposed his own species on others and on the environment, and how much the distance from the human work comforted me. In silence emerges the belonging to a larger whole, the comfort in front of the inescapable cycle of life and the communion with the Universe. The sky has therefore become the natural extension of my home. The experiences of listening, research and contemplation have the ability to give an awareness: that of feeling infinitely small in the infinitely large, but also to feel infinitely large in the infinitely small.

The Sun is the star of our solar system, there are 4 billion stars in the Milky Way and ours is only one of billions of galaxies in the Universe. In this order of magnitude each one remains unique and unrepeatable. There has never been anything like each of us in the history of the Universe, nor will there ever be. This is what I think about when I stand under the sky: I enjoy accessing a state of wonder and comforting my human nature. In the same way, this is why everyone, bringing himself, will be able to see his own suggestions mirrored in the shots, and maybe experience the irrefutability of being precious individuals, unique and thinking, temporary guests and often profaners of a beautiful place“.

Many works will be present within this exhibition that will also see some installations: particularly striking is the work that gives the title to the exhibition, in which the director plays with the invisible and imperceptible uncovering the vault of a church to reveal the true Celestial Vault.

“Modica celebrates one of its most famous daughters, Alessia Scarso, director of the film Italo, and does so by hosting her exhibition-event dedicated to the world of stars – Ignazio Abbate and Tonino Cannata, president and superintendent of the Fondazione Teatro Garibaldi, underline – A unique opportunity to be enchanted by the discovery of the sky, the stars, but also by the research work that Alessia, together with the guest astrophotographers, carries out during the year offering us surprising artistic results. In this path of photos and videos, we will also embrace the art of the painter Ilde Barone, also a refined artist and a daughter of Modica, who will further enrich this exhibition, an initiative with which the Foundation completes its summer cultural offer, continuing until the beginning of autumn and placing itself once again as a point of reference in the Sicilian South East even for major events“.

The inauguration is scheduled for August 22nd but it is only for invites due to the anticovid rules.